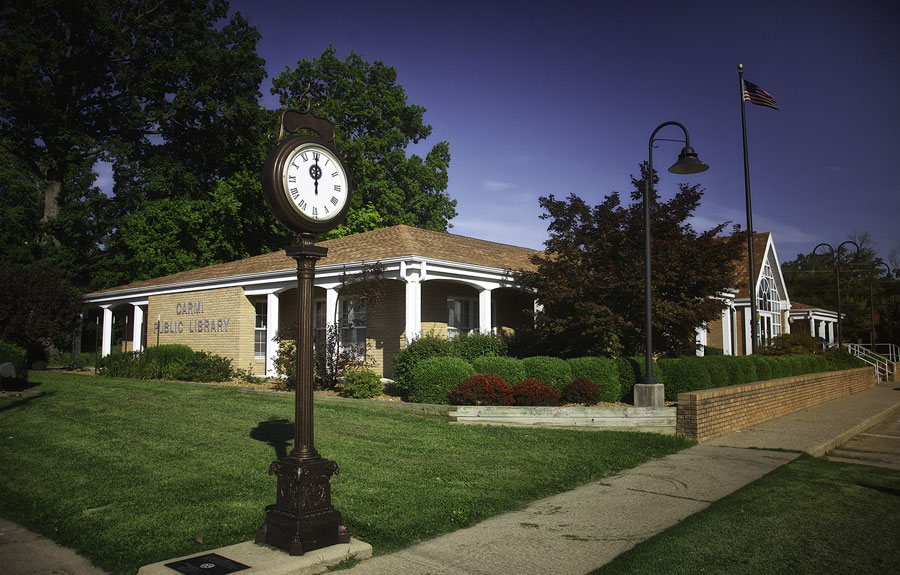 Carmi Public Library was formed about 120 years ago and was originally housed in the Ratcliff Inn on Main Street, which still exists. The library now contains over 32,000 volumes and patrons check out close to 40,000 items per year. The Carmi Public Library has an extensive children’s section, including a special seating area for story time and multimedia.

Carmi Public Library offers free wifi and computers for the public to use. Electronic books for download as well as multimedia items are available through the library.

Special programs are offered throughout the year at Carmi Public Library for adults and children. In addition there are fund raisers for the library, as well as those held through the Friends of Library. There’s also a community/conference room available to the community for a small charge.

Did you know that library also offers

You can find a catalog of our titles at Catalog: cmip.illshareit.com

Won’t you became a Friends of the Library Member?

The Friends of the Library is a group dedicated to promoting the Library as a cultural, educational, and recreational asset to our community.

Local historian, Wm. Kent “Pete” Fulkerson, in his book about the Carmi Public Library has traced the history back to 1898 when  a group of ladies formed with an objective of stimulating intellectual development and culture in Carmi; thereby, having an objective of raising funds for a public library.  This group of ladies formed the “Home Culture Circle”.  On January 1, 1899, a “book shower” was held and the Carmi Public Library began in the second floor of the Ratcliff Inn.  Ultimately the library was housed in its first separate library building at the corner of Church Street and Cherry Street, an Andrew Carnegie building,  opening in 1915.  Today, the Carmi Public Library is housed in a modern facility at 103 Slocumb Street with over 30,000 volumes.

A genealogy library was established by the society in 1988 by Charlene Shields and Janet Armstrong, with a strong assist by Janet Pritchett. It enjoyed the financial and personal sponsorship of Mary Smith Fay, C.G.

The library has a microfilm reader and printer, and several computers for research purposes. Carl and Lois Shelton’s 54000 name database is available on the computer, and the files of Ira Shain (also at the Norris City Public Library), Margaret Land (also at the Carmi Public Library) and many other genealogists are available in hard-copy surname files and family history books. A listing of the of the library collection is now online, with a large file for A-L titles and surnames and M-Z titles and surnames. These are very large webpages, slow to load and may hang your system.

The library was originally housed in the first floor of the Ratcliff Inn, in office space originally used to generate income for the society.  In April 1999 it relocated to Carmi’s old Carnegie Library, which was donated to the society by the City of Carmi in the fall of 1998, after a new city facility was completed.  The library is an attractive example of prairie-style architecture, designed in 1914 by Clifford Shopbell of Evansville. The library’s email address is [email protected]

The Genealogy Library is accepting books, family histories, scrapbooks, or GEDCOM files which include White County connections. The computer files will be maintained in separate directories and not used for commercial purposes. Janis Du Bois is currently Library Director.

Mrs. Fay passed away in June, 2000, and willed approximately 1,500 genealogy books to the library in Carmi, which doubled our collection. We have taken an inventory of all library materials and have published our catalog online. The library was renamed the MARY SMITH FAY GENEALOGY LIBRARY OF THE WHITE COUNTY HISTORICAL SOCIETY in December 2000.

The volunteer staff at the genealogy library will do research at the courthouse or library. They ask for a $10 per hour donation to the library plus 25 cents per page for copies. If you are interested, send a letter with your questions, a budget, and as much background information as you can provide to the address below.